A very interesting study in JAMA Surgery from Wallis et al. received a lot of press coverage. The research team showed that female patients treated by male surgeons not only more commonly experienced post-operative complications, but also suffered a higher mortality, than when treated by female surgeons.

What did they do?

This big-data study covered 12 years of the 20-most-common surgical procedures performed in Ontario, Canada. Wallis and team investigated how patient-surgeon sex discordance correlated to a composite for adverse postoperative outcomes. (A deeper investigation of the earlier Wallis 2017 study).

Women once again receive the metaphorical short-end of the medical-stick. Whether societal or elsewhere in the health industry value-chain, long established gender inequity reveals itself in worse surgical outcomes for female patients.

Hang on a sec…

But this cannot just be written off as a consequence of existing social gender inequity, but rather a disquieting causal loop between this as a cause and the result then perpetuating further inequity.

If some part of a surgeon’s ’professional success’ is wrapped-up in the ability to achieve positive outcomes for patients while minimising the adverse, then male surgeons are failing their female patients when compared to either female surgeons, or to the care they provide their male patients.

And yet the same discordance cost is not true for female surgeons.

Read on for the take-home & more medical-gender influences...

On a Monday morning in March, an anaesthetist stood outside his children's inner Sydney school as a solitary protestor, asking parents to keep their children home if they could.

Some interesting research on common and not-so-common obstetric anaesthesia topics: both new trends and continuing trends, as well as a cautionary medicolegal reminder.

Metodiev & Mushambi's editorial looks at the attitude shift among obstetric anaesthesiologists to more favourably consider the LMA or SGA for Caesarean section under GA.

They review the evidence for aspiration risk, particularly noting what we learned from NAP4 (2011) but contrast this with many studies showing safety of SGAs for GA CS (over 8,000 patients in total, with Halaseah 2010 investigating 3,000 alone!). Interesting, but before we get too excited keep in mind that the populations studied are likely very different from parturients you may typically look after.

"...there is insufficient evidence to recommend universal or selective replacement of tracheal tubes with SGA devices during general anaesthesia for Caesarean delivery. Aspiration remains the main concern." – Metodiev & Mushambi (2020)

Not only is neurological injury the second most common reason for obstetric anaesthetic claims (behind inadequately managed pain during Caesarean section), it carries the highest average claim cost.

The review is full of many useful observations, but Reynold's 2000 advice regarding interspace level choice for spinal access is by far the most important: always access the intrathecal space at the lowest possible level, and "...the L2/3 interspace should not be an option."

McCombe & Bogod spend some time exploring the variability of cord termination level, individual variability of the intercristal line, and the inaccuracy of anaesthetist interspace level estimation. Well worth reading the whole review.

Five things I love about the C-MAC 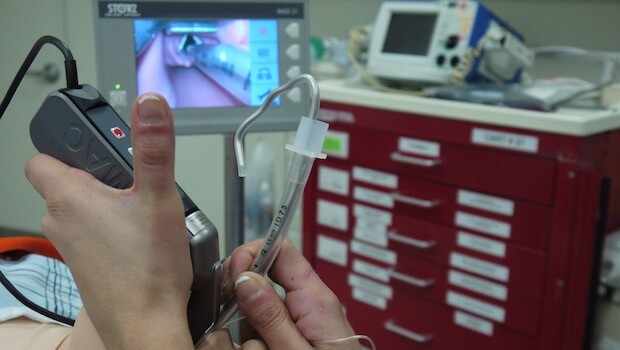 After the first video laryngoscope was conceived by New York emergency physician Jon Berall in 1998, commercial success quickly followed with the 2001 Glidescope (designed by a vascular surgeon nonetheless!). Our love of the videolaryngoscope has grown ever since.

Like many anaesthetists and anesthesiologists I've used several different videolaryngoscopes over the past few years. The character that sets apart the videoscopes I like to use from those I do not is how well they enhance airway techniques I use every day rather than requiring a new technique specific to their device.

Overwhelmingly this comes down to how similar the laryngoscope is to a standard Macintosh blade rather than inventing a whole new shape. While there may be theoretical (or even real!) benefits to increasing the angle of the blade or adding extra conduits, when I have a difficult airway I want to augment the tools and techniques I use every day rather than change to something completely different. (When I want to change to something completely different I'll pick up a fibreoptic bronchoscope or something sharp!)