The Four Horsemen of the Medical Research Apocalypse 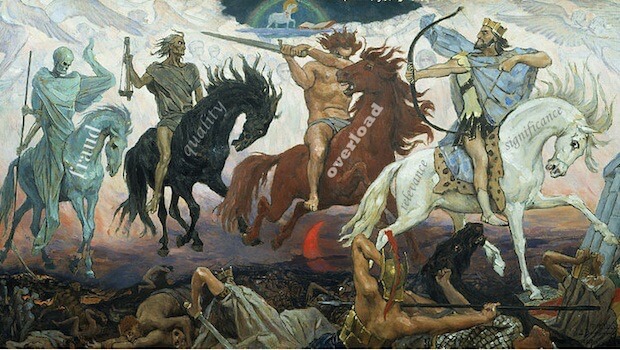 While we know more about the human body, critical care, anesthesia, and resuscitation than ever before, it is conversely more difficult to integrate evidence and guide decisions where they matter: for an individual patient.

The challenge of practicing true patient-focused, evidence based medicine has weighed on me over the past year. Despite ever growing bodies of evidence, staying up to date has not become easier – it actually feels harder because of a competing balance between the friction of staying up to date and the (quite appropriate) community pressure to always provide the best proven-care possible.

I like to believe that I already absorb the big evidence-based improvements into my practice: benefits of lower transfusion thresholds, epidural benefits (or not), the harm of peri-operative beta blockade, the safety of nitrous, the benefit of magnesium in pre-eclampsia or for fetal neuro-protection – and now the potential harm of peri-operative aspirin and clonidine. Sure, they all share some controversy – but the weight of the evidence is enough that every critical care physician should at least consider how such evidence impacts their practice.

Yet in the same way that there are hundreds-of-thousands of our colleagues that have never heard of or even considered some of this evidence – there is probably an equal amount of evidence that I am unaware of that may improve the health and safety of my patients.

The future is already here – it's just not very evenly distributed. – William Gibson.

This is what keeps me awake at night: the unknown knowns – evidence 'known' in the greater medical-research community that I'm ignorant of – and the medical falsehoods that I think I know, but do not.

The four horsemen of the evidence-based medicine apocalypse create the friction in moving from unknowns to knowns:

Over the coming weeks I will explore each of these challenges, and then finish with at least one idea for addressing them in order to stay up to date and practice the best medicine that each of us is capable of.