The problem with Electronic Medical Records

It is not so much that all Electronic Medical Records are terrible, but rather that it is so close to true that the occasional net-positive EMR roll-out does not move the needle much on its own. The greater challenge is that the reasons why the EMR experience is so poor also make it unlikely that EMRs will get dramatically better in the short-term.

The root of the EMR problem, fundamental to their very nature, ensures that EMRs will get worse before they get better.

I'm yet to be impressed by a hospital-wide monolithic EMR – one that is intuitive to use, enhances safety and reduces clinician workload rather than adding to it. An EMR that offloads administrative burden from healthcare providers, and enhances authentic interactions with patients. Where are the truly efficient EMRs that are true improvements to the paper-based systems they replace?

“Show me an [EMR that] only triples my work and I will kiss [their] feet.” – House of God1

Many EMRs are frustrating and inefficient, though tolerable in a necessary-evil kind of way. Clinicians put up with the many small EMR-inflicted aggravations because of the promises made for improved safety, efficiency and lowered costs. Yet the modern EMRs of today have largely failed to live up to even these low-bar aspirations.2

Not all EMRs are created equal. Not only is there an entire industry of EMR providers, bundlers, project managers and solution experts, but also a formal hierarchy of hospital EMR levels certified by the non-profit Healthcare Information and Management Systems Society (HIMSS). HIMSS describes eight hospital EMR stages termed the EMRAM (EMR Adoption Model). These range from stage 0 hospitals,3 which have installed at least one, but not all, of the three foundational department systems (laboratory, pharmacy, and radiology), right up to stage 7 hospitals, where every hospital function is paperless and robust.

The EMR revolution has been relentlessly rolling over the globe like an imperial regime change, promising everything, yet so far, delivering less. The US has led the charge, where today over 80% of all hospitals have adopted at least a basic EMR. EMR adoption rates (EMRAM) are however much lower in many other countries, particularly in the Asia Pacific region. 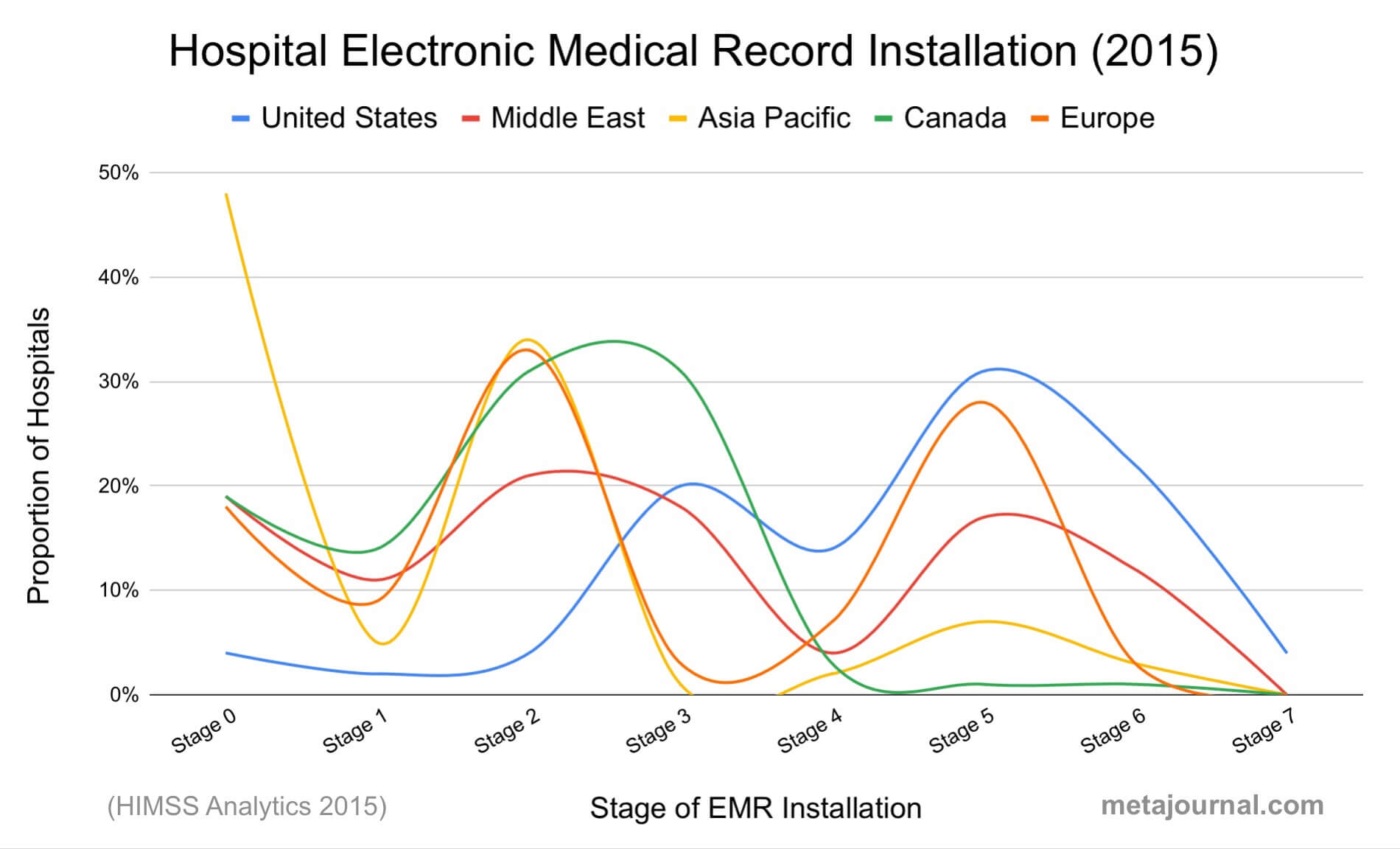 Despite the breathless excitement from the EMR advocates, many studies show EMRs increase physician and nursing administrative burden in settings as varied as the emergency room, ophthalmology clinic and physician's office. Worryingly there is evidence associating EMR use with both physician burnout and possibly even increasing medical error rates.

Hill, Sears & Melanson’s 2013 study of a community hospital emergency department (ED) found that after transitioning to an EMR, doctors spent 43% of their time on data entry and yet only 28% on direct patient contact. They estimated EMR use required some 4,000 mouse clicks in a typical 10 hour shift!

A similar study (Park 2012) observing EMR effects in the ED showed a four-to-five fold increase in documentation, increasing the number of incomplete charts; a shift in documentation responsibility to the more junior members of the medical team; and most worryingly, to the use of paper notes as a transitional aid between the patient bedside and the charting room. In order to satisfy the EMR, emergency physicians were now taking scrappy bedside paper notes that would later be transcribed into the EMR system.

“...and it caused ED doctors' work to become largely stationary in the charting room, which further contributed to reducing doctors' time with patients and their interaction with nurses.” (Park 2012)

These observations will not surprise EMR-using doctors and nurses. As an EMR consumes a greater range of hospital systems, it requires healthcare providers to feed-the-beast with ever more voluminous clinical data in order to progress patient care.

This paradoxically increases physician cognitive burden as more patient data needs to be remembered between EMR interactions, and undermines multitasking by enforcing a rigid workflow that ignores the dynamic reality of clinical medicine.

Perhaps having an EMR is associated with other positive safety-culture aspects in an organisation, like having clear procedures and policies? However the use of an EMR is no safety-panacea, and brings its own safety issues and potential errors.

The very rigidity that advanced EMRs impose in the name of safety and quality, also contributes to the disempowering and depersonalising impact they have on this very same care.4 The monolithic EMR is about the least patient centric change to modern healthcare.

In the past, sick children drew pictures of their time in hospital with nurses and doctors engaged with their small patients. Today it’s just as likely that those pictures will show their doctors and nurses sitting at a computer.

Perhaps it’s not all bad...

The rise of the EMR may not be all doom-and-gloom. Some large health systems have seen quality improvements: improved adherence to guideline-based care, better surveillance and monitoring, and decreased medication errors.

Australia’s most advanced EMR deployment, at Melbourne’s Royal Children’s Hospital, has been celebrated as a AUD$48 million, trend-bucking success with much fanfare since its 2016 inception. Recent data from the RCH reports a 25% mortality reduction since EPIC arrived – although the hospital is both careful to avoid claiming the improvement is due to the EMR, but simultaneously still hopes we assume it is.5

This optimistically suggests that there is hope for the EMR. The North American experience is that objective improvements occur when large organisations implement their own custom systems, rather than for small hospitals using commercial off-the-shelf EMRs. Physicians themselves may also be more satisfied when using higher EMRAM-level systems, and the RCH example hints that we may need ambitious, complex and expensive Big Bang deployments to pass beyond the trough of despair of EMR adoption.

And yet arguing that the solution to the EMR problem is to deploy ever more complex EMRs should make us uncomfortable. Complexity is not the solution.

Complexity is half the problem.

Part 2, ‘The Root of the EMR Problem’ will next explore the causes of our EMR pain.