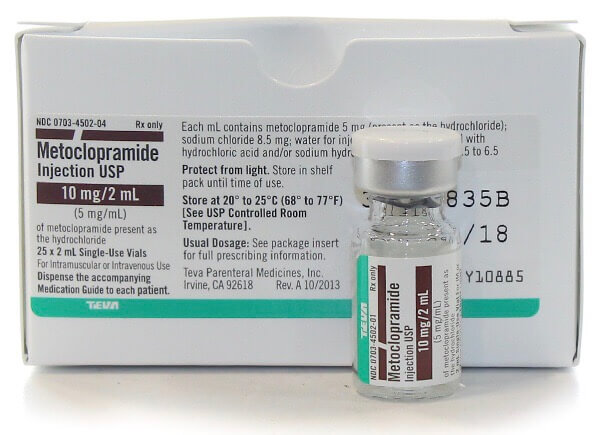 Metoclopramide had long been written off by many anesthetists and anesthesiologists, aware of trials and meta-analyses that show no or limited effect in treating or preventing nausea and vomiting – in particular limited ability to prevent post-operative nausea and vomiting (PONV). Most recently Henzi, Walder and Tramèr (1999) were able to show only very limited benefit for metoclopramide 10 mg in preventing vomiting and no significant effect in preventing nausea in adults.1,2,3

Metoclopromaide is a benzamide, predominately used for antiemesis and its gastric prokinetic effect. It is marketed under the names Maxalon®, Pramin® and Reglan® in various countries. Although considered an old drug its antiemetic action was first identified in 1964 by French doctors Justin-Besançon and Laville.3 (In contrast the analgesic tramadol is often considered a "modern" drug outside of Europe, but was launched by Grünenthal GmbH in 1977.)

Metoclopramide readily crosses the blood-brain barrier where it mediates anti-emetic effects primarily as a dopamine D2 antagonist in the chemoreceptor trigger zone (CTZ – located in the area postrema of the 4th ventricle). Metoclopramide also has mixed 5-HT3 receptor antagonist and 5-HT4 receptor agonist actions. The former may contribute to anti-emesis at higher doses and the later to its pro-kinetic effects. Muscarinic cholinergic actions have also been identified, both through increasing acetylcholine release and by increasing receptor sensitivity to acetylcholine in the upper GI tract – further contributing to the pro-kinetic effect.

The rise of the 5HT3 antagonist in our PONV arsenal has further pushed metoclopramide down a growing list of options. The Society of Ambulatory Anesthesia no longer even recommends the use of metoclopramide for PONV prophylaxis:

"Some therapies have proven ineffective for PONV prophylaxis. These include metoclopramide when used in standard clinical doses (10 mg IV)"4

Metoclopramide's remaining virtues appeared limited to speeding gastric emptying5 and it's incredibly low cost – in many health systems cheaper in fact than an ampoule of saline.

Kranke, Apfel and team were the first to highlight that a large body of research contributed by a single researcher and institution could significantly shift the findings of a meta-analysis.6 The dominant institution that worried Kranke et al. was Toride Kyodo General Hospital in Japan – and the researcher was Yoshitaka Fujii.

Fast forward eleven years, and while the Fujii fraud is now well known (see "Fujii, anesthesia and research fraud") the impact of Fujii's research on assumed anesthesia truths is still emerging. The impotence of metoclopramide is the first accepted truth to be revisited. 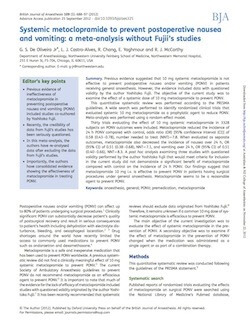 De Oliveira and team performed a systematic review of 30 studies and over 3000 patients examining metoclopramide 10 mg, specifically excluding those with "questioned validity" from Fujii.7 They showed metoclopramide to be significantly better than previously thought, effective in reducing both the incidence of PONV, and even nausea and vomiting when examined individually.

While these results still fall a little short of the performance of 5HT3-antagonists (ondansetron reportedly has a NNT=6 for nausea prophylaxis and NNT=7 for vomiting) the small difference in efficacy may be made up for by the dramatic lesser cost.8 De Oliveria's results for metoclopramide compare favourably with 8-10 mg of dexamethasone, having a reported NNT of 7.1 but a terribly wide confidence interval (95% CI 4.5-18).

Clinicians have been reluctant to use metoclopramide not just for its perceived lack of efficacy but also believing that it carries a higher risk of side effects than other antiemetics. However De Oliveira's review did not detect any increase in minor side effects such as headache, dizziness or sedation when compared with saline controls, and showed no statistically significant increase in extrapyramidal reactions.9

As with all meta analyses, conclusions must be tempered with an appreciation of the limitations when grouping different studies together. Although this review includes studies involving a range of different surgeries the authors show a low measured heterogeneity in the results – giving us some confidence in the generalizability of metoclopramide prophylaxis to different types of surgery and anesthesia techniques.

John Carsisle followed up his impressive exposure of the Fujii fraud10 with a lap of honor quantifying the differences between Fujii's anti-emetic research and results from other authors.

Compared to other authors Fujii showed 5HT3-antagonists granisetron and ramosetron to be more effective11 and droperidol to be less effective for PONV prophylaxis. Fujii also showed rescue anti-emesis to be less frequently required after granisetron than for droperidol and metoclopramide, whereas other researchers showed no difference. Finally and of most interest, Fujii's papers suggested a synergistic action between anti-emetics absent from the research of others – in fact other research suggests that there may be antagonism between certain anti-emetic drugs.12

"if we exclude the data of Fujii et al. – Granisetron remains more effective than metoclopramide for all four outcomes, with significant differences vs droperidol persisting for two outcomes (vomiting, rescue) but disappearing for nausea and the combined "nausea and vomiting" outcomes. Against placebo, the effects of granisetron and ramosetron are less – Postoperative nausea and vomiting after granisetron triggers rescue antiemesis at the same rate as droperidol and metoclopramide, instead of less often. The unique characteristic of granisetron to act synergistically with other antiemetics disappears."

If we take a few steps closer in the "metoclopramide question" a specific surgical procedure offers further insight: cesarean section under regional anesthesia. This group of patients suffers both a high incidence of PONV and uniquely also a high incidence of intra-operative nausea and vomiting (IONV). 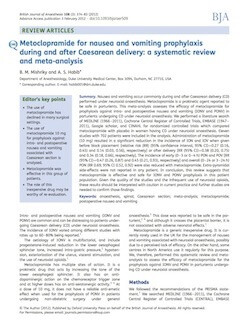 Mishriky and Habib reviewed this very question in a meta-analysis, concluding that metoclopramide was an effective agent for both IONV & PONV prophylaxis during cesarean section – a finding that probably does not surprise the older and more experienced obstetric anesthesiologists among us.13

They showed 10 mg of metoclopramide to be effective at reducing intra-operative nausea and vomiting whether given before block placement or after delivery – although the effect was greater if metoclopramide was given before the block (RR 0.27 vs 0.38, & 0.14 vs 0.34 for ION and IOV respectively)14 Metoclopramide was also associated with a lower incidence of early PONV (0-3 h) and PONV over all (0-24 h & 3-24 h). Reassuringly, extra-pyramidal reactions were not reported in any of the 11 studies totally 702 patients.

Though we need to bear in mind that there was a lot of heterogeneity between the included studies: spinal (9 studies) vs epidural (2); before block (4) or after delivery (7) timing; and most notably presence (4) or absence (7) of neuraxial opioids. This diversity resulted from the inclusion of many older studies – unfortunately metoclopramide has not been an exciting research topic for some time!

Even in the face of the broad study diversity, sub-group analyses showed metoclopramide resulted in significant reductions in intra-operative nausea and vomiting with quite low NNTs – for example, pre-spinal metoclopramide investigated in three studies resulted in a NNT of 2 and 5 for avoiding ION and IOV respectively.1617

An old drug with old tricks?

Modern 5HT3-antagonist anti-emetics are still superior to metoclopramide: they are both more efficacious and have better side effect profiles. But for this benefit there is a substantial cost that must be considered when choosing an anti-emetic – these drugs are around 20 times more expensive than metoclopramide in most markets."Number needed to treat" when applied to large at-risk groups must also be balanced with our capacity to treat in a medical world with finite health budgets.

Metoclopramide – worthwhile after all?

he case for using metoclopramide for IONV & PONV prophylaxis

Quantity of Evidence
★ ★ ★ ★ ☆
Moderate number of studies over a long time period.

In Real Life
★ ★ ★ ★ ☆
Metoclopramide is almost universally available, very cheap and while newer antiemetics are better, still offers a favorable side effect profile.

Overall Practice Changing Strength
★ ★ ★ ★ ☆
The use of metoclopromide in groups at high risk of IONV or PONV likely offers clinically significant benefit at low cost and very small risk.