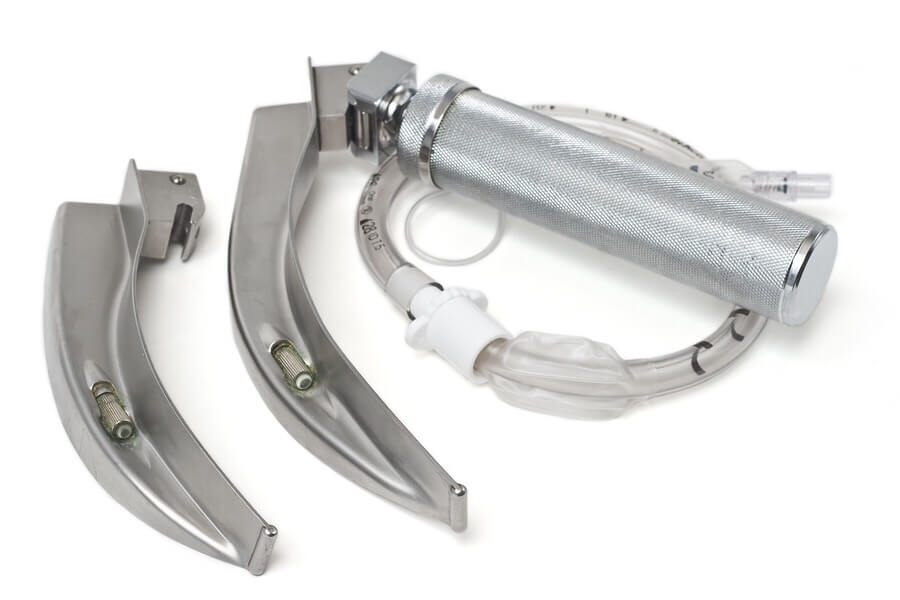 Sugammadex is a modified Ɣ-cyclodextrin and the first 'selective relaxant binding agent' (SRBA). Sugammadex has a high binding affinity for the aminosteroid rocuronium, reversing its neuromuscular blockade almost instantly. By using a large modified-RSI dose of Rocuronium (1.2 mg/kg) and then a deep-paralysis-reversal dose of sugammadex (16 mg/kg ~$1,200), reversal of muscle relaxation has been demonstrated to be faster even than the offset of suxamethonium.

But does this really mean the end of sux?

Sugammadex reignited the anaesthesia community's interest in replacing suxamethonium. For the first time we could not only use rocuronium for a modified rapid sequence induction, but then use sugammadex to reverse the paralysis even faster than suxamethonium could itself wear-off. Several studies showed that sugammadex 16 mg/kg could reverse even deep rocuronium relaxation.4 Sørensen also showed no difference in the quality of laryngoscopy views, although the study was not powered to detect such a difference. Sørensen et al. simulated rapid sequence inductions, showing rocuronium-sugammadex yielded a median time from intubation to spontaneous ventilation of 216 s compared with 406 s for suxamethonium alone.5 Sugammadex is an ideal drug to reverse even large doses of rocuronium in a 'Cannot Intubate Cannot Ventilate' (CICV) scenario.

This seems to make rocuronium-sugammadex a natural successor to suxamethonium. However in our rush to replace suxamethonium we are neglecting the goal of the rapid sequence induction.

Rapid sequence induction, like it says on the tin

Just as it says on the tin, the aim of the rapid sequence induction is to rapidly induce anaesthesia allowing fast intubation and airway protection. Rapid offset, while desirable is not the primary goal. Suxamethonium has a warm place in many anaesthetist's heart because it quickly produces excellent intubating conditions. Fast onset and excellent conditions lead to quickly protecting the airway from blood or gastric contents.

Rocuronium reliably produces acceptable intubating conditions within 60 seconds6 - but likely only excellent conditions at a higher dose (1-1.2 mg/kg). Most of the time the difference will not matter. But 'most of the time' is not an acceptable foundation for an anaesthetic technique.

"There was a statistically significant RR favouring succinylcholine when comparing the primary outcome of excellent intubating con- ditions with a RR of 0.86, (95% CI 0.80 to 0.92). The number needed to harm (NNH) for this outcome was 8." Perry JJ, et al.

Perry and team's Cochrane meta-analysis of 37 studies comparing suxamethonium to rocuronium included data from 1,300 patients.7 Sub-group analysis showed significantly better intubating conditions at 60 seconds for suxamethonium compared with rocuronium doses of 0.6-0.7 mg/kg. The authors showed no significant differences at higher rocuronium doses but due to the small number of studies could not make a recommendation.

And here lies the problem.

The purpose of rapid sequence induction is rapid intubation. If rocuronium cannot be shown to provide as good intubating conditions as suxamethonium even at a higher dose, then rocuronium should not universally replace suxamethonium.

In that context it is ironic that the arrival of a drug suitable for reversing rocuronium when intubation fails is driving this debate.

The final problem is the practicality of using sugammadex in a CICV situation. Sørensen's comparison of rocuronium-sugammadex to suxamethonium is impressive but the artificial nature of the trial undermines its applicability to real world anaesthesia:

When we use suxamethonium the clock starts at the end of the syringe. When we use sugammadex the clock cannot start until we decide, prepare and give our wonder drug.

Sugammadex's 200 second lead will be quickly eaten up and exceeded in a true airway crisis. It is the rare anaesthetist or anesthesiologist who can make the decision to bail out of a failing intubation in the first 2 minutes. The psychological pressure of an emergency induction makes our fixation on intubation more likely rather than less.

Suxamethonium reversal is (generally) automatic. Rocuronium reversal requires a decision by the anaesthetist at a time when decisions are often not well made.

Relaxant reversal is no panacea in an airway crisis. Kyle, Gaylard and Riley described a CICV scenario where reversal with sugammadex did not relieve the airway loss and a surgical airway was still required.8 The perception of sugammadex as an RSI safety net may encourage anaesthetists to make decisions that they normally would not.

Sugammadex: some answers, still many questions

The choice to use rocuronium-sugammadex for rapid sequence induction in your practice will depend upon on three criteria: 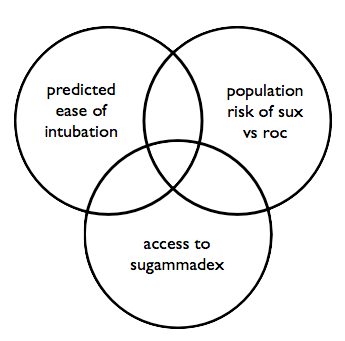 Your decision to use rocuronium-sugammadex must be contextualised: to your resources, your population, your patient and your patient's needs. Over simplified black-and-white rules have very little place in anaesthesia.

It is important for us not to loose sight of the purpose of the RSI: rapid intubation and airway protection. The drug that best facilitates this in each individual patient is the drug to use. Suxamethonium still has much to offer our patients.

The case to replace suxamethonium with rocuronium-sugammadex

Quality of Evidence
★ ★ ★ ★ ☆
Sugammadex has been shown to quickly, effectively and consistently reverse even deep rocuronium relaxation. In the RSI situation rocuronium reversal is faster than even the offset of suxamethonium.

Quantity of Evidence
★ ★ ★ ☆ ☆
There are only a small number of studies investigating sugammadex use in the RSI. Most studies use simulated RSI.

In Real Life
★ ★ ☆ ☆ ☆
The practical use of sugammadex for reversal of Roc-RSI is questionable outside the controlled environment of an RSI simulation.

Overall Practice Changing Strength
★ ★ ★ ☆ ☆
Roc-sugammadex offers an alternative to suxamethonium in specific situations where it is contraindicated, but the weight of evidence does not currently support total replacement of suxamethonium.

Finally, in part three next week I will explore the evidence for and against using sugammadex to manage rocuronium anaphylaxis.